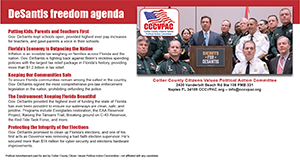 Our Political Action Committee is not allowed to promote Federal candidates, but we are excited that Congressmen Byron Donalds (District 19) and Mario Diaz-Balart (District 26) won their elections handily to take on their Democratic opponent.

Also representing a small portion of Immokalee is Scott Franklin who won and is unopposed. US Congress District 18, a new district due to gaining an additional congressional seat in Florida only covers a small part of Eastern Collier County outside of Immokalee. Scott Franklin, Republican won the Primary and has an NPA opponent and a write in candidate. 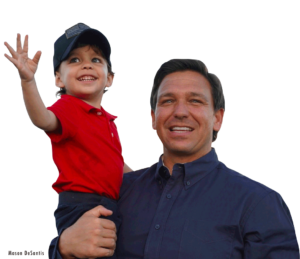 Florida has lead the nation in almost all categories under the direction of Governor Ron DeSantis. He has across the board endorsements from all parts of the community, from education, environmental, business, health and more. His opponents include Democrat Charlie Crist, plus a couple of other non-Republican party candidates. Crist will take Florida backwards if elected. Don’t mess with success, and vote Ron DeSantis

His top highlights include:

Florida’s Economy is Outpacing the Nation

Inflation is an invisible tax weighing on families across Florida and the nation. Governor DeSantis is fighting back against Biden’s reckless spending policies with the largest tax relief package in Florida’s history, providing more than $1.2 billions of tax relief.

Florida communities are ranked among the safest in the nations, and Governor DeSantis is committed to supporting law enforcement and first responders. He signed the most comprehensive pro-law enforcement legislation in the nation, prohibiting defunding the police.

Provided the highest level of funding the state of Florida has ever been provided to ensure our waterways are continuing the road to progress. programs included Everglades restoration, EAA Reservoir Project, Raising the Tamiami Trail, Breaking ground on C-43 Reservoir, Red Tide Task Force, and the list goes on.

Protecting the Integrity of Our Elections

Governor DeSantis promised to clean up Florida’s elections, and one of his first acts as Governor was removing a bad faith election supervisor. He’s secured more than $18 million for cyber security and elections hardware improvements.  See the entire list here

District 80 includes a portion of North Collier County and southern Lee. Adam Botana is the only State Representative in our area to have a challenger. He will be facing Democrat Mitchel Schlayer.

Our Candidate choices are highlighted below in red font:

Jerry Rutherford was chosen over incumbent Jory Westberry (Incumbent) due to Rutherford’s strong commitment to Republican values and Westberry’s unimpressive performance during our PAC interview process.

Incumbent Jen Mitchell was chosen for multiple reasons including her insistence in following Governor Ron DeSantis’ guidance concerning mask mandates, opening schools, and keeping extracurricular activities ongoing throughout the pandemic. The school has strengthened its rankings in the State during her term as well.

Her opponent, Kelly Lichter, is not our choice noting her past antagonism during her previous Collier County School Board term, and the current multiple lawsuits she has brought against student’s parents at Mason Classical Academy where she currently chairs it Board of Directors at Mason, and even Hillsdale College (which is the gold standard for charter schools).

Timothy Moshier was chosen for his statements to embrace parent’s rights and exclude non-Republican values from our school curriculum. In addition, he will represent the far eastern parts of Collier County, as he lives in Everglades City. Roy Terry is the Incumbent board member.

There is a candidate that shows in the Supervisor of Elections candidate roster named Eliabeth Yiachos, but that name is not listed in the Collier County Voter rolls. This appears to be a ghost candidate.  This is the paperwork filed that shows no finances or assets

There is a candidate that shows in the Supervisor of Elections candidate roster named Emily Dalto, but the name “Teixeira Dalto, Emilia Maria” shows is who is registered as a Republican in December 2020, but never voted. This appears to be a ghost candidate.  This is the paperwork filed that shows no finances or assets.

All Candidates in this race are Republican. Choose one: David Boothby, Mark Cherney, Charlie Cottiers (Incumbent)

Both Candidates in this race are Republican. Choose one: Brian Cross, William Douglass

Both Candidates in this race are Republican. Choose one: Patrick Dearborn, Kevin Gerrity (Incumbent)

Both Candidates in this race are Republican. Choose one: Jim Burke (Incumbent), Tyler Hardt

Judges on the Ballot