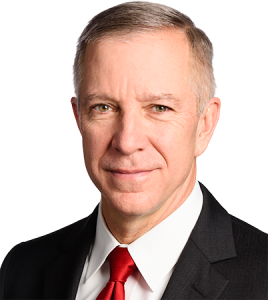 Join us Friday, February 3rd as we bring Thomas Spoehr to discuss our National Defense status. He will discuss our strengths and weaknesses we face as a country. What are our greatest threats and what can we do to overcome them.

Thomas Spoehr serves as director of Heritage’s Center for National Defense where he is responsible for supervising research on matters involving U.S. national defense.

Prior to joining Heritage, Spoehr served for over 36 years in the U.S. Army, attaining the rank of Lieutenant General. He is an expert on national defense policy and strategy, and has testified before the U.S. Congress on defense strategy, budgets and equipment modernization. Spoehr’s articles and commentary have been published widely in national media and he is often called upon to provide expert commentary and analysis.

Early military service included operational assignments ensuring Army and joint forces were proficient in countering weapons of mass destruction (WMD) which consist of chemical, biological, radiological, and nuclear weapons. As one of the Army’s foremost uniformed experts in this area, Spoehr served as the Commandant of the Army’s Chemical, Biological, Radiological and Nuclear School, with the responsibility for the policy, training and strategy for this critical area. In the wake of the 2015 incident involving the shipment of live anthrax spores by Defense laboratories, Spoehr was asked by the Secretary of the Army to lead a Task Force which concluded in 2016 with the approval of a comprehensive regime of corrective actions to prevent future incidents.

Later in his Army career, Spoehr served in senior leadership positions in the Pentagon, responsible for charting the Army’s future year financial plans, developing equipment modernization strategies, and achieving business efficiencies and reform. Analysis and recommendations conducted by Spoehr were used by the Secretary of the Army and other senior leaders to reduce or eliminate military headquarters, reduce back-office costs, and streamline lengthy bureaucratic processes, saving millions of taxpayer dollars. He has published articles describing methods to make the military more efficient and effective, and is a widely requested speaker on these topics.

His operational experiences include service with combat units including the 82nd Airborne Division and the 1st Armored Division. Spoehr participated in Operation Urgent Fury (the invasion of Grenada) and in 2011 served as Deputy Commanding General, U.S. Forces Iraq in Operation New Dawn, where he successfully oversaw the safe withdrawal of all U.S. forces and equipment from Iraq ahead of schedule, one of the most complex and logistically intensive operations ever attempted by the U.S. military.

He earned a bachelor’s degree in Biology from the College of William and Mary, Williamsburg, VA, a Masters of Arts in Public Administration from Webster University in St. Louis, MO, and a Master of Arts in Strategic Studies from the U.S. Army War College, Carlisle, PA.

He and his wife, Cynthia, live in Alexandria, Virginia, where he enjoys kayaking, home repair, and hiking. They have two grown children, Catherine and Peter, who served with the 2nd Cavalry Regiment in Afghanistan, and five grandchildren.