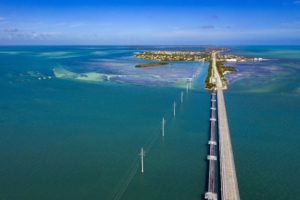 Florida is home to more than 21 million people and has an economy that produces over $1 trillion in economic output annually. With over 1,300 miles of coastline, numerous rivers and lakes, and the vast Everglades ecosystem, water plays an essential role in Florida’s economy and the quality of life of its growing population. While sustainably managing the state’s water resources is crucial for our daily activities, for example, the Everglades ecosystem alone provides the drinking water for nearly 9 million Floridians. It is also essential to critical sectors of Florida’s economy, such as real estate, tourism, and fishing.

According to Visit Florida, over 130 million out-of-state visitors came to Florida in 2019. A study by Rockport Analytics indicates that in 2018, out-of-state visitors contributed more than $91 billion to the state’s economy and supported over 1.5 million jobs via tourists spending money on hotels, restaurants, and other goods and services. Detailed surveys of these visitors by Visit Florida indicate that many of them are drawn to the state to participate in water-based activities like going to the beach, recreational fishing, and boating, making protecting water quality important for maintaining this critical part of the state’s economy.

According to the National Marine Manufacturers Association, recreational boating contributes more than $23 billion annually in Florida and supports over 92,000 jobs.

Real estate is another sector critical to Florida’s economy. According to the National Association of Realtors, the real estate industry accounted for about 22% of Florida’s economy in 2019. Just as water plays a substantial role in the tourism and recreational industries, it also plays a substantial role in real estate. For instance, a detailed study by the Florida Realtors Association estimated that water quality degradation due to a 2013 algae bloom in the St. Lucie Estuary, Loxahatchee Estuary, and the part of the Indian River Lagoon north of the

It’s important to note that the studies above provide just a glimpse of the role of water in the state’s economy. Clean water is important for many other sectors of Florida’s economy. For instance, commercial fishing and seafood industries support over 76,000 jobs and contribute over $16 billion to the state’s economy. It’s clear that sustainably managing the state’s vast water resources is necessary to provide economic opportunity, jobs, and a high quality of life to present and future generations of Floridians.

A Great Week in Florida Politics and Government