On the Right Side of Civil Liberties

The erosion of civil liberties over the decades has gone into lightspeed in recent months with the Covid-related mask mandates, vaccine passports and shutdowns, taking it from the important realm of public health to the critical realm of personal freedom.

That’s why the battle being waged by Governor Ron DeSantis and other courageous, principled Republicans on behalf of the essential civil liberty of freedom is so vital and requires our support. In the case of mask mandates, it is a question of whether it is the right of parents to decide if their child should be masked, or government-run schools. Some union-beholden school boards in Florida want to make the decision, then dictate that on every student and parent. For Governor DeSantis, it’s the parents who should decide — they can mask their children or not mask them — and that is the side of individual freedoms.

It’s the same dynamic in vaccine passports. The Governor supports the vaccines and has been vaccinated. But he, like most Republicans, believes that the decision should be up to each individual, not government entities including public schools, and not corporations or businesses. In America, in the Republican Party, we treasure freedom and will fight to defend it.

As part of this fight, parental rights were strengthened this past week when the Florida Department of Health and State Board of Education issued Emergency Rules to protect parents’ freedom to choose what is best for their children. These rules are pursuant to the Governor’s Executive Order 21-175 to allow an effective, in-person learning environment for Florida’s school children during the upcoming school year, preventing harm to healthy students and safeguarding the rights of parents and their children.

This rule is to ensure Floridians’ constitutional freedoms are not violated, do not violate parents’ rights under Florida law to make health care decisions for their minor children; and protect children with disabilities or health conditions who would be harmed by certain protocols, such as face masking requirements.

Note on our Third Quarter Meeting:

Omni Hotels & Resorts will continue with its current Safe and Clean protocols, but will follow state and local mandates pertaining to guest and associate requirements for mask wearing and social distancing while indoors. At this time there aren’t any mandates for Osceola or Orange counties. 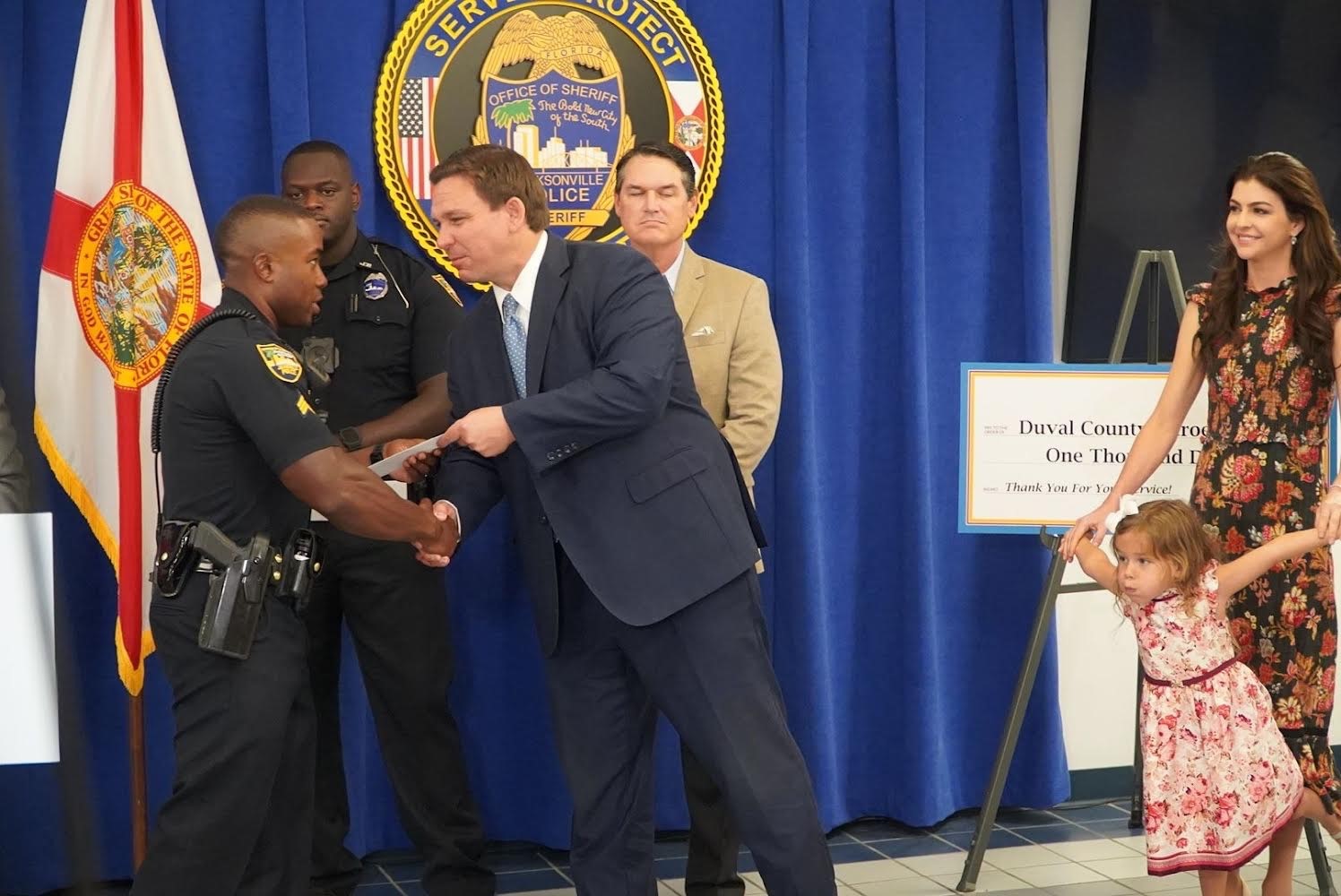 “First responders work every single day – no matter the conditions – to keep us safe,” Governor DeSantis said. “That was perhaps never more apparent than during the last year and a half during the pandemic. I am proud to deliver these checks to show our immense gratitude for their service.”

The Governor presented one-time checks to the Urban Search and Rescue Task Forces, who worked tirelessly after the Surfside tragedy.

“The men and women joining me here today from Urban Search and Rescue Task Forces 1 and 2 are the best of the best. We thank them for their tireless response in Surfside and hope these relief checks express our gratitude for all that they have done in our state.”

Governor DeSantis then distributed checks to first responders with the Jacksonville Sheriff’s Office, where he was joined by Jacksonville Mayor Lenny Curry.

Governor DeSantis also traveled the state to thank educators by distributing one-time disaster relief checks up to $1,000 in recognition of their hard work teaching students in the challenging 2020-2021 school year. The Governor kept the schools open last year for crucial in-person learning and Florida educators stepped up. These 177,000 Disaster Relief Payments represent the state’s gratitude.

“During the legislative session, I proposed $1,000 bonuses for all public-school teachers and principals because I recognized the important role teachers played in providing in-person learning,” Governor DeSantis said. “We recognized that teachers, principals, and first responders have dealt with countless challenges over the past year. I think people are going to look back and say, ‘Florida stood by its kids and teachers’ while other states did not.”

The Governor was in Bay County and Pinellas County to personally thank and encourage educators in those districts.

The historic gaming compact between the State of Florida and the Seminole Tribe of Florida was approved by the U.S. Department of the Interior this past week. This agreement, the largest gaming compact in history, will generate a minimum of $2.5 billion in new revenue to the state over the next five years and an estimated $6 billion through 2030. The Tribe is not currently making any revenue payments to the state.

“The final approval of this historic gaming compact is a big deal for the State of Florida,” Governor DeSantis said. “This mutually beneficial agreement will grow our economy, expand tourism and recreation and provide billions in new revenue to benefit Floridians.”

“Today is a great day for the people of Florida, who will benefit not only from a $2.5 billion revenue-sharing guarantee over five years but also from statewide sports betting and new casino games that will roll out this fall and mean more jobs for Floridians and more money invested in this state,” said Marcellus Osceola Jr., Chairman of the Seminole Tribe of Florida. “We thank Governor DeSantis, President Simpson, Speaker Sprowls, and the Florida Legislature for their leadership and hard work.”

Republican Senators Marco Rubio and Rick Scott voted against the $1 trillion infrastructure bill that passed the Senate the day before voting against the even more massive $3.5 trillion budget framework.

“I support investing in roads, bridges, broadband, and efforts to mitigate against sea-level rise, and I hoped there would be a bill I could vote for,” Rubio said. “But this bill was negotiated in secret, rushed through the process without meaningful opportunities to have input, and adds a net increase of $350 billion to the national debt. I can’t vote for a bill like that.

“The Congressional Budget Office has estimated that the $1 trillion Infrastructure Investment and Jobs Act would add a net $350 billion to projected deficits through 2031. The package follows the Democrats’ irresponsible American Rescue Plan, which prompted Obama Administration economists to raise alarms over inflation. And it will be followed by “a massive, $3.5 trillion spending proposal through the U.S. Senate that would fundamentally transform America into a far-left fever dream.”

Senator Marco Rubio, who is the top Republican on the Senate Intelligence Committee, is calling on the director of national intelligence to investigate allegations that the federal government “unmasked” Fox News host Tucker Carlson. Rubio wrote that recent media reports that “Mr. Carlson was unmasked by a government agency” have “only fueled the perception that unmasking is being used as a political hammer or to satisfy curiosity.” 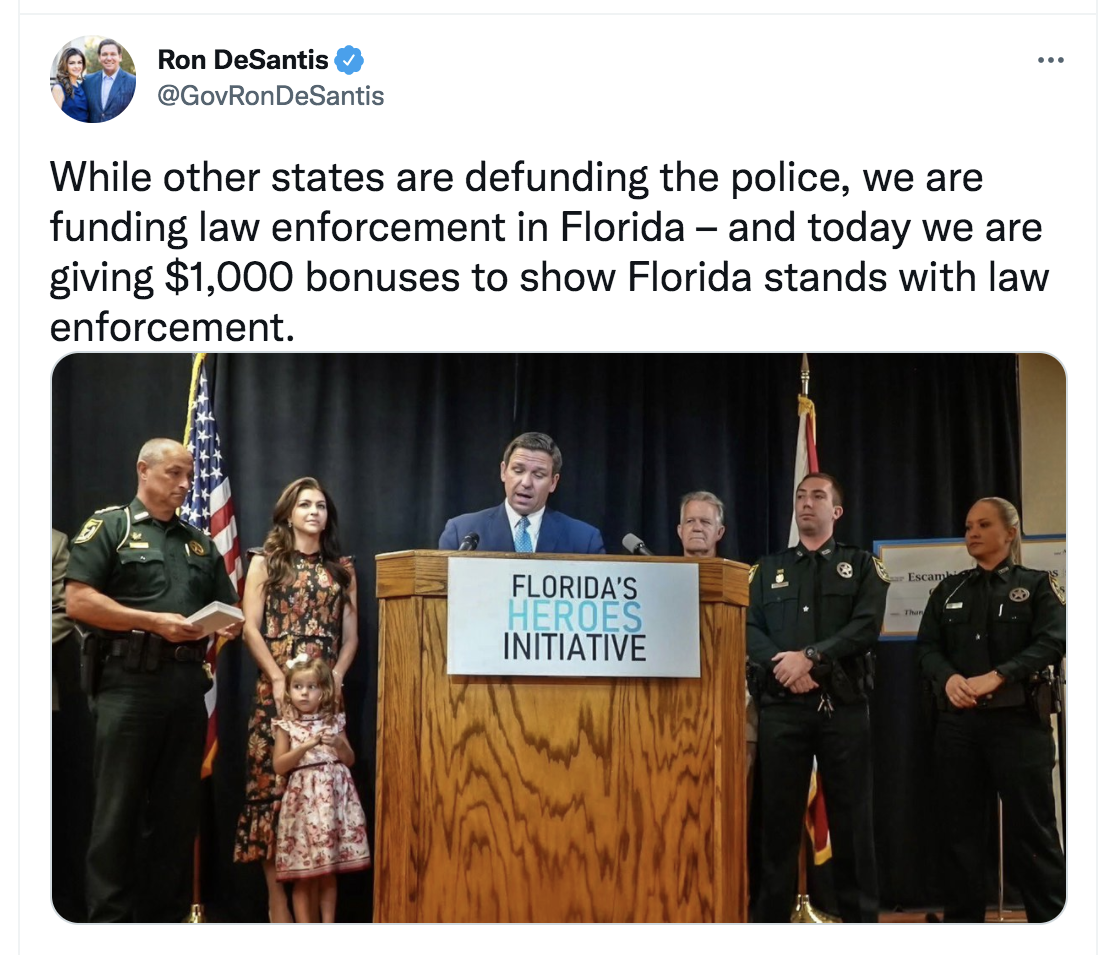 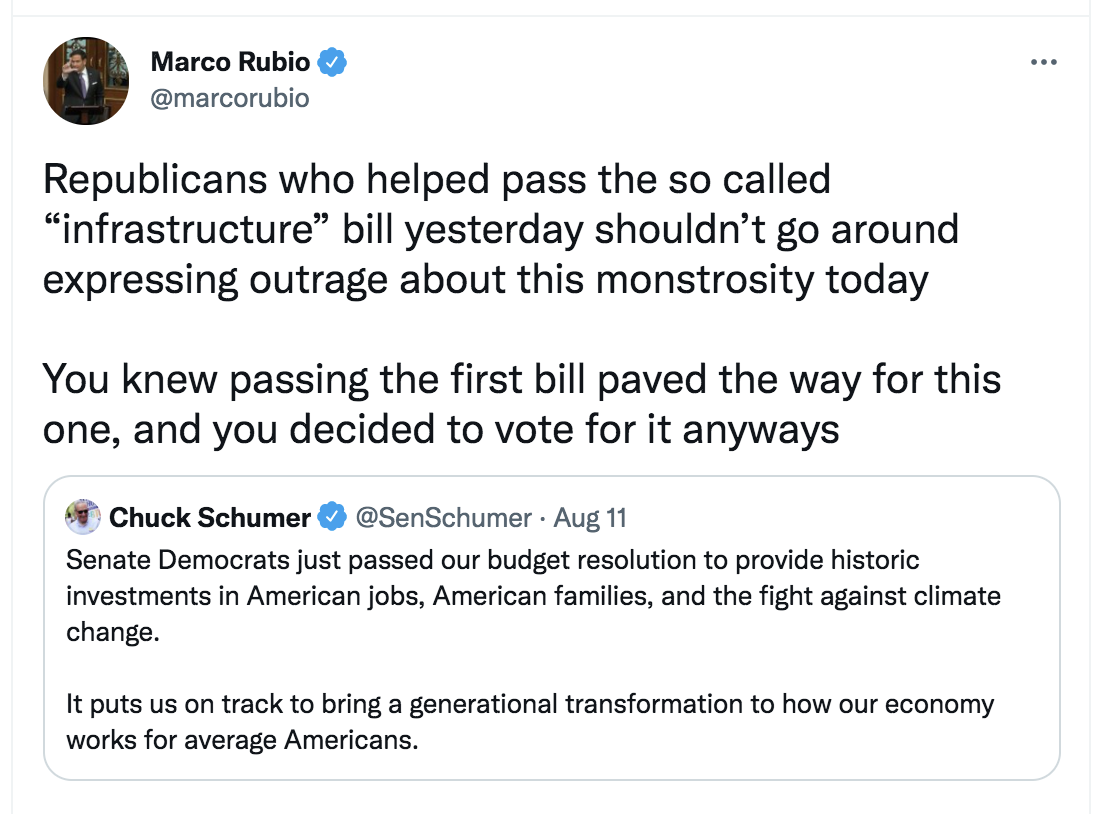 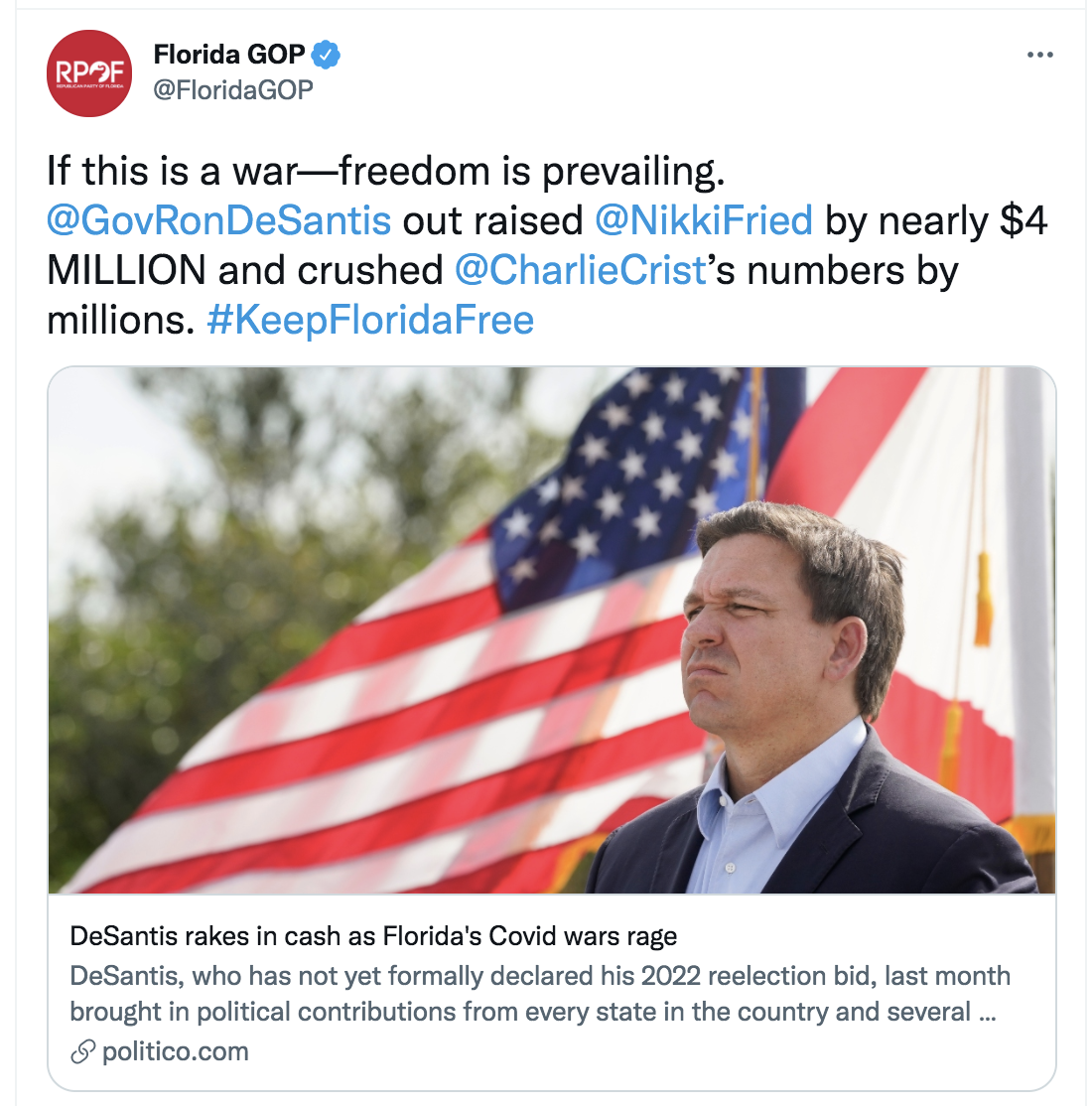 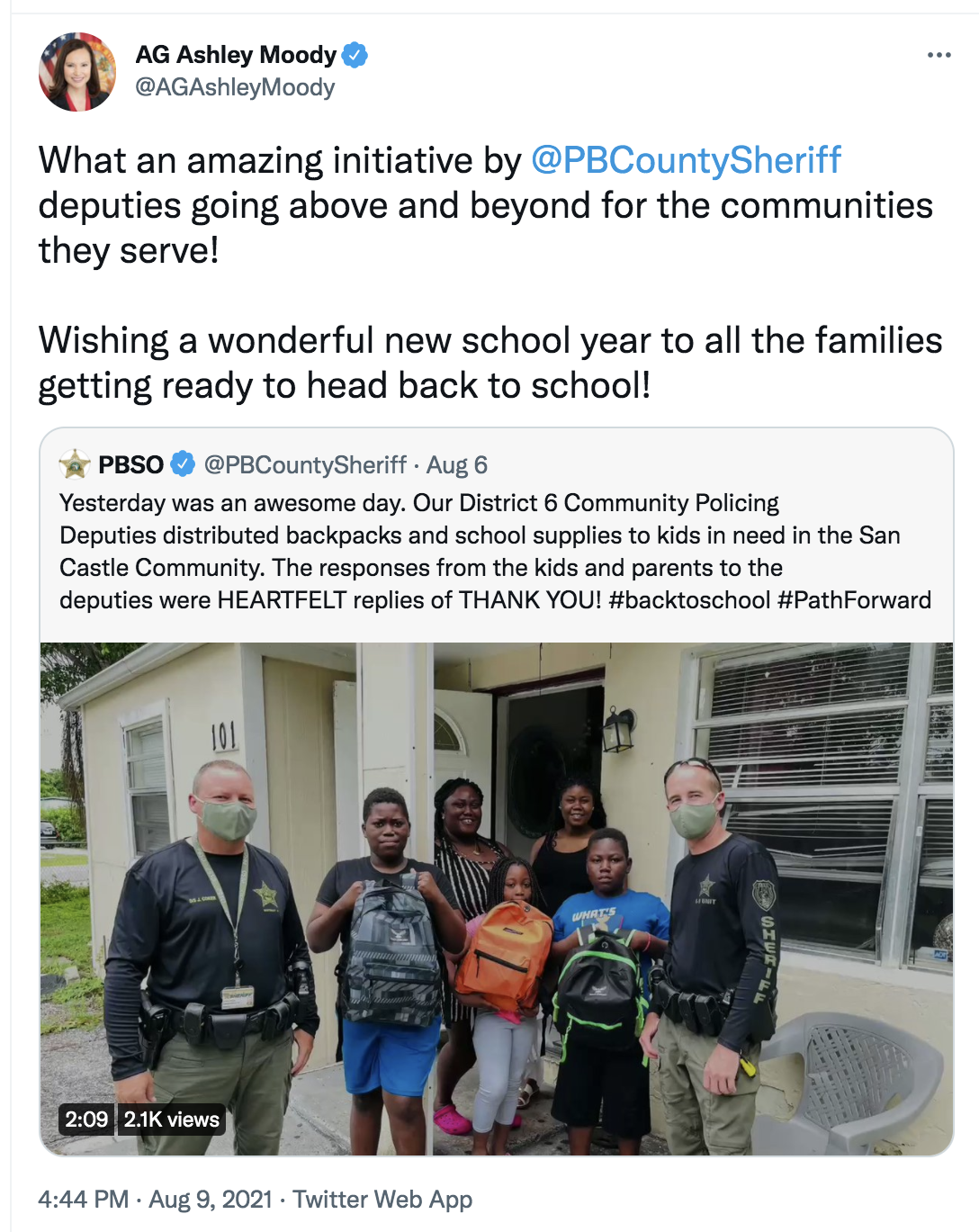 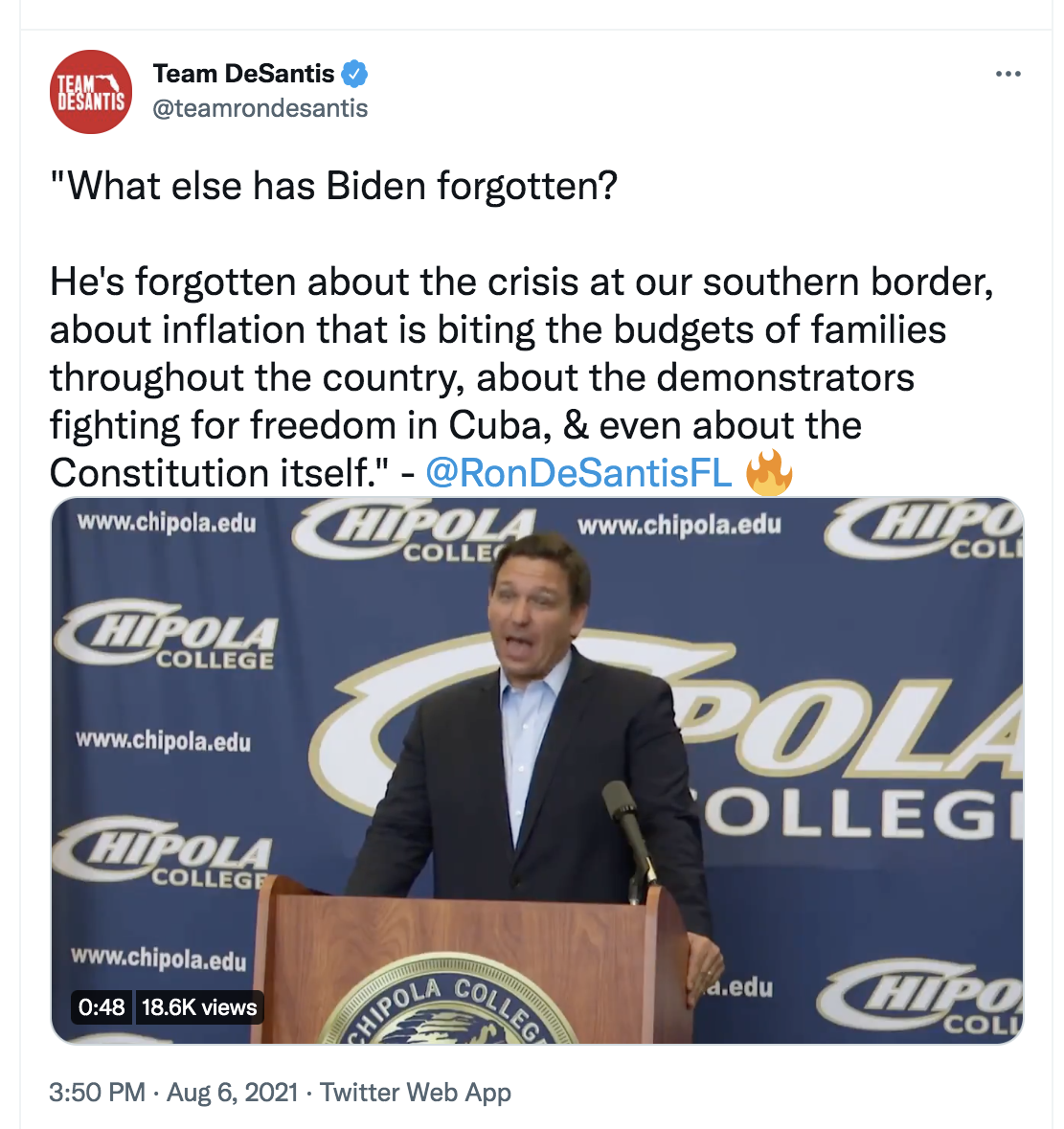 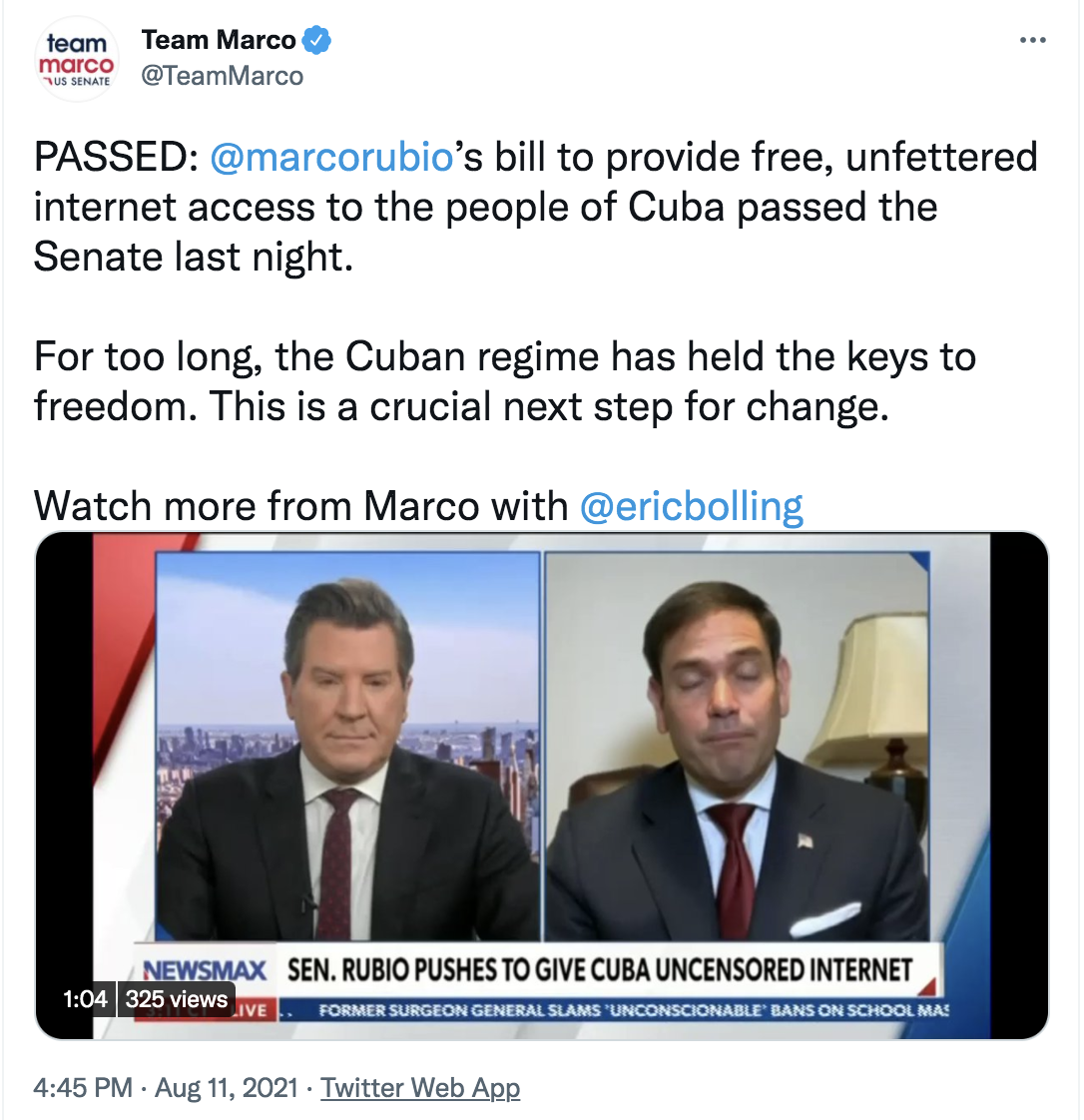 REMEMBER: @FloridaGOP and retweet and share. The Republican message must be spread around the state and you are integral to making that happen.